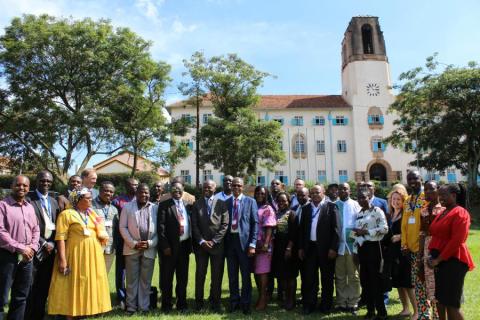 On 24th May 2018, 40 high level politicians from across Africa visited Makerere University to among other things engage in an intellectual discourse The politicians moving to the School of Social Sciences with staff from the Department of Political Science and Public Administration. The politicians had visited Uganda to attend a five-day international conference hosted by the Konrad Adenuar Stifftung Media Programme for Sub Sahara Africa at Speke Resort Munyonyo.
Held in the Senior Common Room at Makerere University, the intellectual engagement sought to assess the role of African Academia in shaping contemporary governance discourse.
Dr Julius Kiiza, an Associate Professor in the Department of Political Science and Public Administration delivered the keynote address. In his presentation, he explained the contribution of academics to African politics underpinning their increasing role in massaging instead of critiquing bad leadership. “Historically, academics were monks measured by their contribution to improved governance. That has since changed with many now working to please the powers that be instead of fighting for welfare of the common man,” he noted.
Reacting to Dr Kiiza’s presentation, one of the panelists, Dr Edward Kaweesi, castigated African academics for lack of objectivity.
“Those who decide not to join the civil society organizations to promote what they stand for also have their safe survival line, that is misappropriation of their intellectual rigour, to serve as propaganda outlets and mouth pieces for those in power. Some even move to the extremes of political activity to become part of the espionage machinery, crude spy network of regimes in power. It is for that reason that many African scholars, when it comes to the contemporary governance discourse, they project themselves as part of the civil society organization, part of the industry that is democratic, working as advocates and advisers than objective thinkers preoccupied with giving answers to the unanswered problems of governance,” he explained.
“If the voices of the academics are to remain acceptable and respectable, they need to engage and limit themselves to interrogating questions of governance, without engaging in the forcible imposition and subjective promotion of normative standards,” he advised.
Like Dr Kaweesi, the other panelists who included Dr S.K Simba, Dr Sabiti Makara and Dr Stephen Bwengye from the Department of Political Science and Public Administration also decried the increasing lack of objectivity amongst African academics.
The representative of the Vice Chancellor, Dr Eria Hisali, thanked Konrad Adenauer Stiftung for its continued support for public dialogues and debates at Makerere University. “I applaud Konrad-Adenauer-Stiftung for being that reliable partner that has continuously supported public dialogues and debates at Makerere University. With your support, Makerere University students and staff have been in position to participate in dialogues/debates focusing on topical issues that affect society,” he said.
Commenting on the theme of the discussion, Dr Hisali said everyone in academia has a noble duty to contribute to the debate by providing strategies that can positively and effectively shape the contemporary governance discourse.
The debate was attended by among others former FDC Party President Migisha Muntu; DP President Nobert Mao; the Country Director KAS Uganda Mathias Kamp; the Director of the KAS Media Programme for Sub Sahara Africa, Christoph Plate; the Principal College of Humanities and Social Sciences, Prof. Edward K. Kirumira; the Deputy Principal, Dr Josephine Ahikire; the Dean School of Social Sciences, Dr Andrew Ellias State and the Head Department of Political Science and Public Administration, Dr Paul Omach.